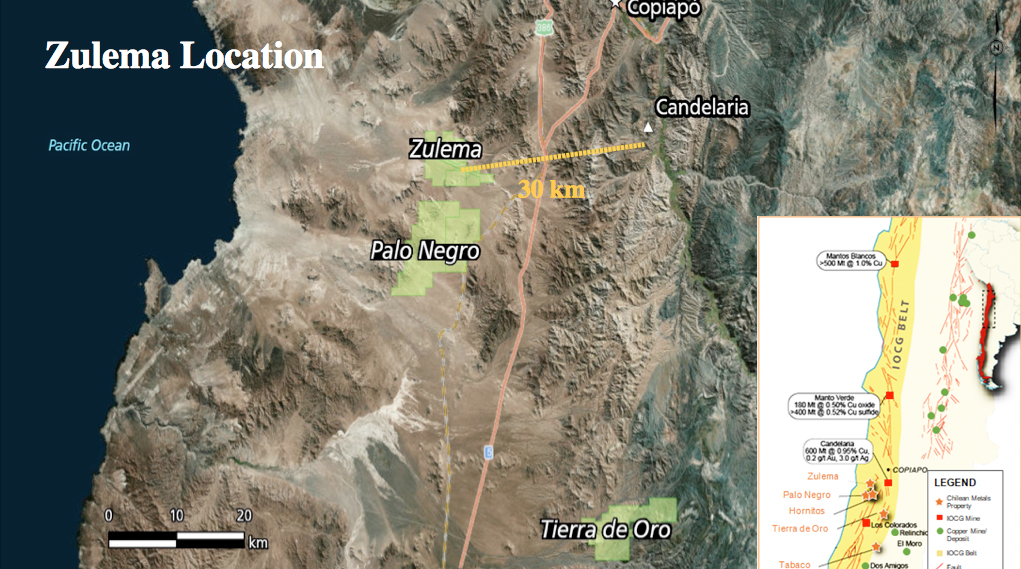 Zulema is located 30 Kilometres from Lundin Mining Corporation’s Candelaria mine and with similar geology, the Company’s Zulema project comprises 4,300 hectares (10,600 acres) in the heart of the productive Atacama mineral belt in Chile’s 3rd Region.

The association of major IOCG-type mineral deposits with the Atacama Fault zone and its splay faults is well-recognized. Candelaria, the world’s second largest “IOCG” deposit* lies adjacent to one such splay fault. Pre-mining reserves at Candelaria were 470Mt @0.95% Cu, 0.22 g/t Au, 3.1 g/t Ag. The Candelaria orebody does not outcrop but is overlain by 100-200m of barren siliceous hornfels and calc-silicate skarn. Copper sulphides occur as stringers, disseminations, breccia in-fillings and mantos. The orebody measures one kilometer in length, 600 metres in depth and is being exploited by low-cost, open pit bulk mining.

The Zulema property is owned 100% by Chilean Metals with no underlying third party royalties or net profits interests. It is road accessible and ideally located at low elevations of less than 400 metres, 30 kms from the mining town of Copaipo, 15 kms from both the Pan-American Highway and Chile’s main northern power grid, and 25 kms from the coast.

Intensely skarned hydrothermal breccia is exposed on the property over an area of one square km and is open to extension beneath sand plains. Sporadic but widespread disseminated copper oxides on surface assay in the range of 0.4 to 5.5% Cu and 0.2 to 0.4 gpt Au. Previous drilling at the extreme southern tip of the main prospective area encountered up to 22 metres of 0.45% Cu and 0.11 grams/tonne Au in stockworks.

✔DDH1 defined the extent of the eastern skarn, intersecting local Cpy between 107 and 126

_____✔Mineralization was most intense at the upper skarn contact

_____✔Starting at 146m +/-, large clots of Cpy to 5cm. appear in addition to potassic feldspar alteration

_____✔322.00 – 375.20 – Hydrothermal breccia with extensive quartz veining at base accompanied by minor copper mineralization

The target is a Candelaria look-alike: a blind, Cu-Au deposit beneath desert sands and siliceous skarn breccias associated with strong surface geophysical features and amenable to bulk, open pit mining methods. Chilean Metals plans to drill test this target in 2015.

While the drilling on Zulema had some encouraging intercepts it deepened the mystery of what we may or may not have. We shot new Magnetics see below 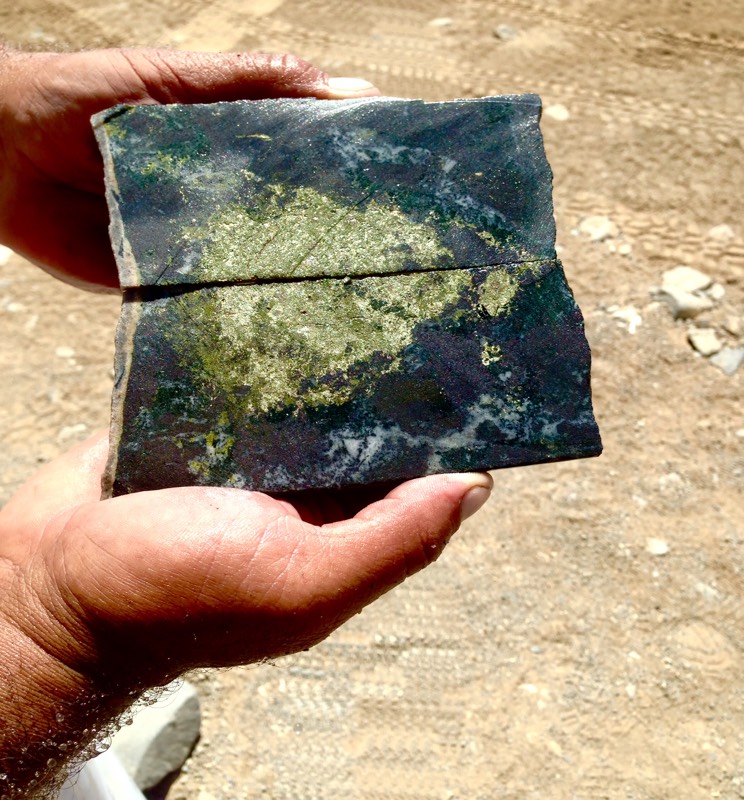 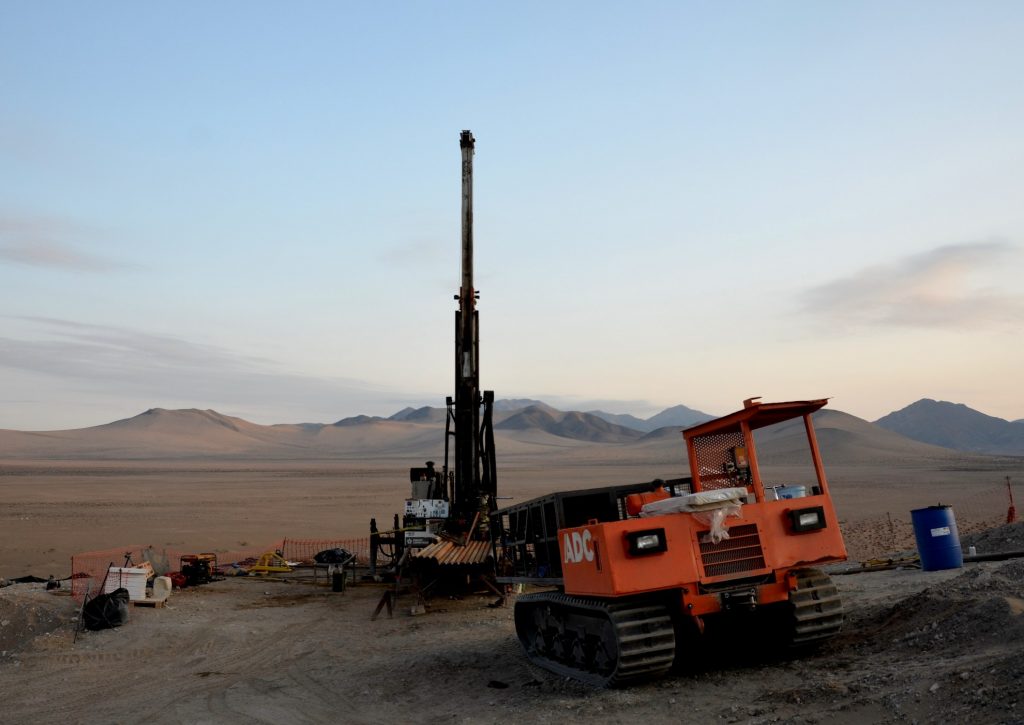 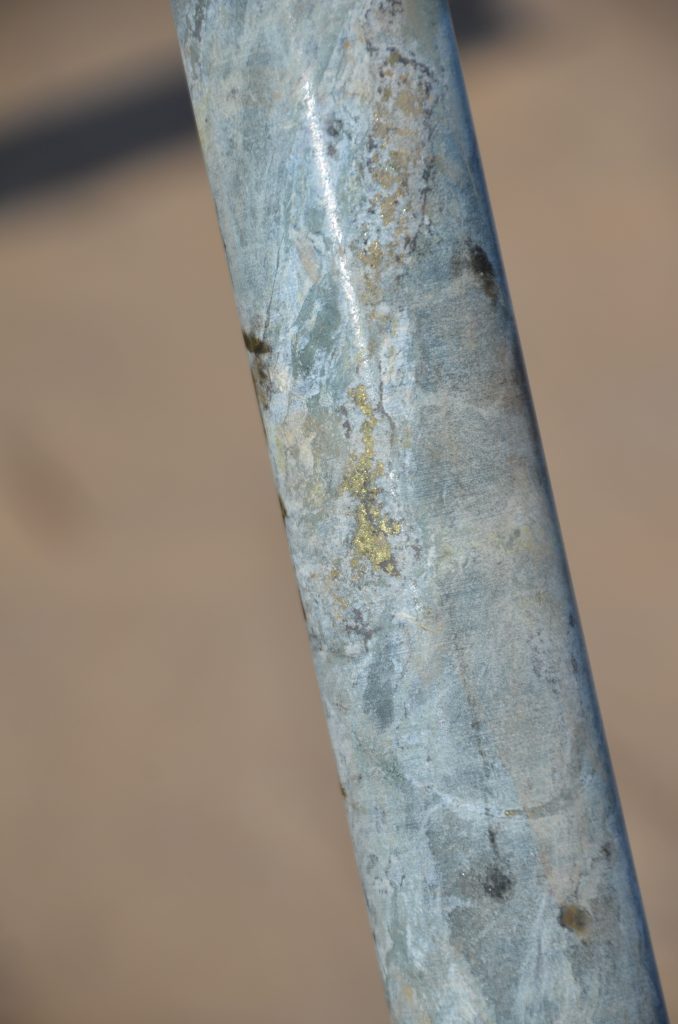 Chilean Metals had the opportunity in late Q2 to review the data on Zulema and Palo Negro with a major mining company with interests in the region. This group has without question the most data and expertise on deposits in this area. They had a four man team review the data and spend four days on site reviewing Zulema and the adjoining Palo Negro.

The dialogue with this major mining company suggested we consider this potential deposit as not a Candelaria like deposit but one more like nearby Mantos Verde. This approach has revised our thinking collectively of the opportunity. They recommended a number of steps including additional geophysics, sampling and mapping. Pending completion of that by year end the plan is to meet again with the major to review revised package. Our objective would be to outline new drilling targets to pursue in Q1 2021 with a JV partner like this major company or on our own accord.